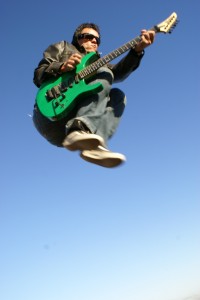 John Maurice Doyle has been teaching guitar and music for over 20 years now. Having studied at U Mass in Lowell Massachusetts, he currently resides in the Los Angeles area. In the short time he’s been in LA, He has established himself as one of the most in-demand guitar instructors in the area. His clients have included international rock stars Yoshiki (X-Japan), Katy Rose, TV and film stars Chris Klein (American Pie, Election), James Spader (Boston Legal), Sinbad, actors that have appeared on Baywatch, Seinfeld many others), Hollywood movie and TV directors and producers Steve Herek (Mr. Holland’s Opus, Rock Star), Mike Mendel (Simpsons, Drawn Together, Lil’ Bush), record producers and thousands of people just like you. He has also served as musical consultant to VH1 TV shows.

John has a passion for playing and teaching guitar. After working with thousands of musicians of all ages and levels, he noticed that his unique teaching methods worked for everybody, both successful professionals as well as beginners. His teaching methods also worked fast! “When I first heard someone tell me that they learned more from me in one lesson than they had in ten lessons with their previous teacher, I took it as a nice compliment. Then after hearing the same exact statement from hundreds of students, that’s when I decided that I needed to create this video series, so that more people could learn from the same methods, and have a lot of fun doing it.”

In addition to offering his private music and guitar instruction, John is also a peak performance coach for musicians. He works with bands and individual musicians creating breakthroughs and overcoming obstacles such as performance anxiety, carpel tunnel syndrome without surgery, inter-band communication and many other challenges that musicians – from beginners to seasoned professionals – face every day.

If you are in the Los Angeles area and are interested in having John as your personal guitar coach or peak performance coach, visit our contact page and get in touch with us for more information.